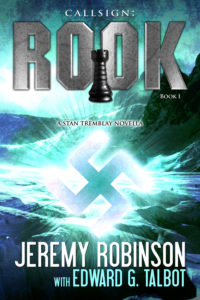 The adventures starts slowly with Rook arriving in a small, hostile farming town that’s been plagued by a wolf-like creature killing its animals. Rook takes on the task of getting to bottom of the mysterious Bigfoot-like creature, before he discovers how deeply things go with an old abandoned Nazi laboratory, and possible incursions from another dimension.

The story, by Jeremy and Edward G. Talbot (a pseudonym for Ed Parrot and Jason Derrig), sets things up slowly, but it gives a deeper glimpse into the wisecracking Rook, when he’s in a situation that really doesn’t call for any wiseacre remarks. And of all the Chesspocalypse Novellas, this one is perhaps the most important, as it leads directly into the next fell-length CT book, RAGNAROK.

Callsign: Rook (2011) is available in paperback and as an e-book. The story is also available as an audiobook, narrated by Jeffrey Kafer. You can also purchase the e-book as a part of the Callsign: Tripleshot collection, which also includes the Queen and Bishop novellas.