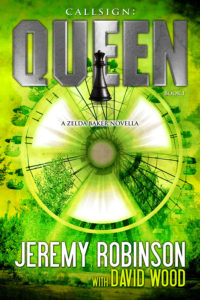 At the end of THRESHOLD, Rook had just gone AWOL from the team, in a fit of depression and complete exhaustion, after the deaths of men under his command. He wandered up through northern Russia, and he hopped aboard a boat bound for Norway. In this story, Queen is on the rampage through Russia, following up on clues, and hunting for Rook. She gets waylaid by Deep Blue, sending her on a side mission to check out a former Manifold facility in the heart of Pripyat—the abandoned town where the Chernobyl nuclear power plant melted down. With rumors of werewolves in the areas, Queen attempts to save a teenage girl while evading a booby-trapped amusement park, and enemy agents—before things really get out of control with the creatures. I love the ending of this short novella, I love the final chase scene, and I was very pleased that it wrapped up with Queen getting a much more solid lead on where she could find Rook.

Is it a side adventure? Yes. But it also introduces a major villainous character who gets his time in the spotlight in the full-length novel OMEGA, and it really delves deep into Queen’s personality, and her past. It’s a quick, action-packed read with a character full of heart and triumph after facing her fears.

Callsign: Queen (2011) is available in paperback and as an e-book. The story is also available as an audiobook, narrated by Jeffrey Kafer. You can also purchase the e-book as a part of the Callsign: Tripleshot collection, which also includes the Rook and Bishop novellas.