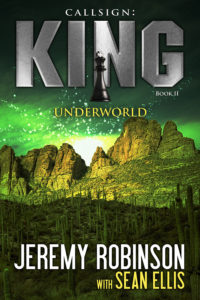 Jeremy chose not to sit on it, so CALLSIGN: KING 2 – UNDERWORLD was the next released story after the Rook novella.

The action increases and the stakes with the threats against King do as well. King and his friend George Pierce investigate a situation in the Superstition Mountains of Arizona, but things quickly heat up with an underground cavern system, creatures living underground, and a world class assassin hunting for King. The plot also furthers the ambitions and threat of the man behind the Brainstorm AI in the first novella. The pace is quick, we get even more character development for Jack Sigler, and the adventure is fun. It also gave voracious fans something to check out while they waited on the Bishop and Knight titles.