Creature Double Feature – Kronos and Beneath are BACK!

Long, long ago, back in 2005, I started my career by self-publishing The Didymus Contingency, Raising the Past, Antarktos Rising, Beneath, and Kronos. A few years into this endeavor I caught wind of something called podcast novels–serialized audiobooks–and found the concept fascinating. Unlike some lucky authors (I’m looking at you, Scott), I am a horrendous narrator. I lacked the equipment, the finances to get the equipment, and the voice to pull it off. So when I was contacted by Jeffrey Kafer, who had done voiceover work and was looking to get into narrating, I jumped at the chance to work with him. The result was the original Kronos and Beneath audiobooks, released for free as podcast novels. Not only were these my first audio books, but they were also Jeff’s. Both books received great reviews and were downloaded…a LOT. I don’t have the stats any more, but if they were sales, I’d have been Scrooge McDucking into a vault of gold coins.

Time passed and thanks to a company called ACX, Jeff and I were able to record and release many more novels via Audible, most notably the Jack Sigler series and the Nemesis Saga. During these years, Kronos and Beneath were available for free, and also somehow ended up for sale on Audible, where they sold, unbeknownst to me, for many years. Also during that time, Jeff recorded 800 more novels, improving his skills, his equipment, and his ear for what works and what doesn’t. With Kronos and Beneath no longer available for free, and no longer on Audible, Jeff and I were excited to re-record and re-release totally new versions of both books, worth paying for, even if you heard the originals for free–or bought the mysterious Audible versions.

So, it is with great excitement that Kronos and Beneath, two of my first five self-published novels, rise again like the fiery Phoenix to… Well, you get the point. If you haven’t given them a listen before, now is the time! If you had the old versions and want to re-listen to the new and improved editions, it’s go time! Details and buy links for both books below. 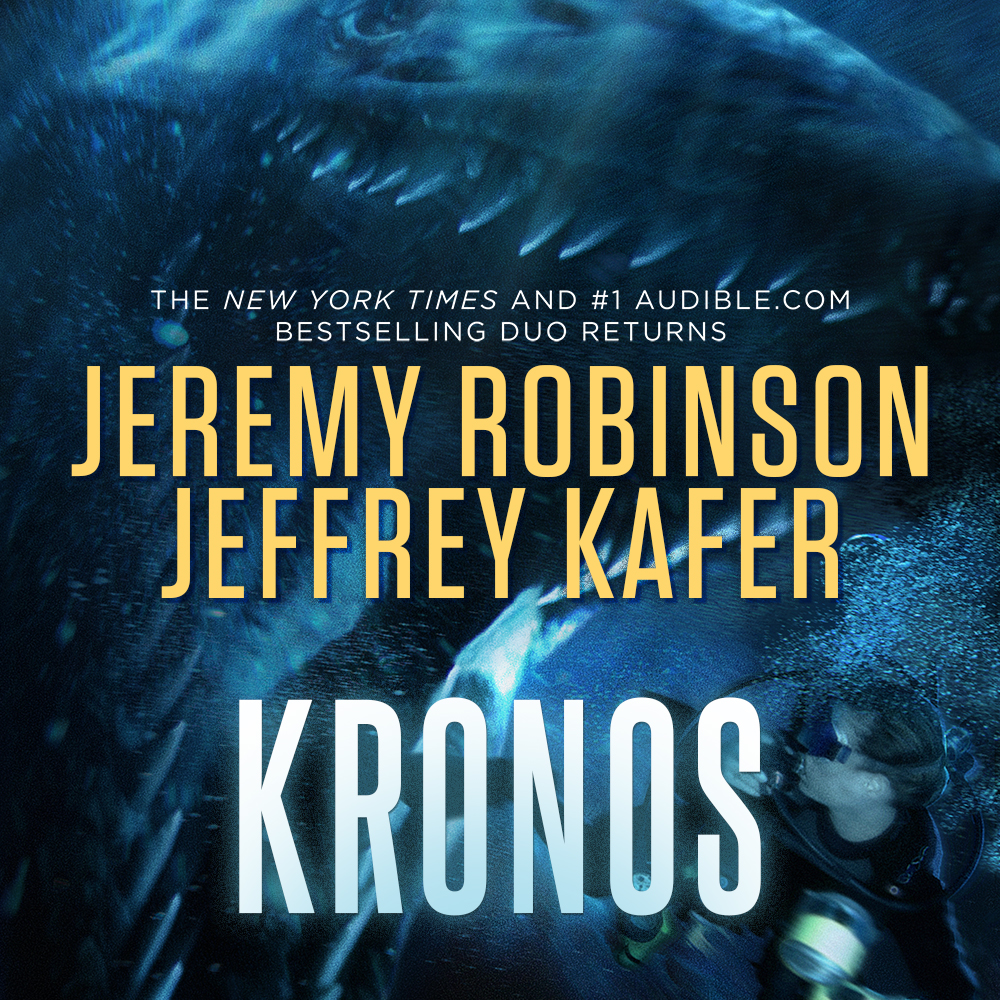 Two years after his wife’s death, oceanographer and former navy SEAL, Atticus Young attempts to reconcile with his rebellious daughter, Giona, by taking her on the scuba dive of a lifetime–swimming with a pod of peaceful humpback whales in the Gulf of Maine. But the beauty of the sea belies a terror from the deep–a horrific creature as immense as it is ancient. There is no blood, no scream, no fight. Giona is swallowed whole by the massive jaws.

Only Atticus remains to suffer the shame of the survivor, and his inconsolable grief turns to an unquenchable thirst for revenge. Drawn by the spectacle, Trevor Manfred, a ruthless billionaire, approaches Atticus with a proposition: Trevor will make available all the advanced technology of his heavily armed mega-yacht, the Titan, to aid Atticus in his death-quest. In return, Trevor is to receive the beast’s corpse as the ultimate hunting trophy. But in the midst of the hunt, Atticus makes a terrifying discovery that changes the way he sees the ocean’s creatures and begs the question: What is Kronos?

The answer sets him on a new and much more deadly course.

When evidence of microscopic life on Europa–Jupiter’s sixth moon–is discovered, a crew of astronauts and scientists embark on a mission to discover its source. Led by oceanographer and biologist, Kathy Connelly, the crew is charged with the task of melting through miles of ice to the hidden ocean beneath, where the search for alien microorganisms begins. But a startling discovery awaits them on the surface of Europa–life. Vast fields of red, plant-like organisms fill the cracks crisscrossing the moon’s surface, surviving on nutrients welling up from the waters below. Encouraged by the discovery of life on the surface, Connelly and her crew activate the Thermal Exploratory System and melt through the ice toward a world that does not want to be found, toward an intelligence that will do anything to make sure they never leave.

Beneath takes all of the action, thrills, imagination, and strange creatures that Jeremy Robinson is known for and puts them in the most extreme environment imaginable: the surface and sub-ice ocean of a moon four hundred million miles away from Earth.