In case you don’t know… The Infinite Timeline brings together nine standalone novels, many with overlapping epilogues, that all take place in the same universe. Picture the MCU, leading up to Endgame. We start with nine loosely connected novels, merge into the INFINITE2 sequel, and then two separate crossovers, and then collide everything together, all at once in one insane book titled SINGULARITY.

To see how the whole Timeline connects, I direct you to the handy-dandy chart below.

The next installment of the Infinite Timeline is TORMENT, which you can…

Jeremy Robinson’s first pulse-pounding horror novel (originally penned under his Jeremy Bishop pseudonym) is a horrific tale of post-apocalyptic terror that is one part zombie story and one part Dante’s Inferno. The story asks hard questions and generates strong emotions in everyone who reads it—anger, excitement, and most of all: FEAR. This book asks the question that everyone is afraid to answer: Are you ready? 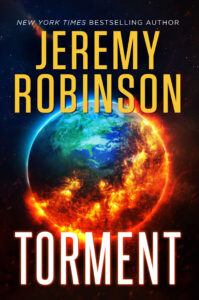 STORY DESCRIPTION: Small town reporter, Mia Durante, finds herself having brunch with the President of the United States on the day civilization comes to an end. An electromagnetic pulse blinds the U.S. Cars crash. Planes fall. Chaos reigns. Power is restored within minutes, but it’s already too late. Russian nukes are falling. U.S. allies around the world are already wiped out. The United States will cease to exist inside of five minutes.

After giving the order to launch a full-scale retaliation, dooming the planet, the President, White House staff, Secret Service, and those lucky enough to be visiting the White House, are whisked below ground where they board several Earth Escape Pods. As the EEPs launch into Earth orbit, missiles descend.

Less than forty survive the end of the world. When they return, they’re greeted by survivors of a different sort. The bloodbath that follows leaves Durante and nine other survivors on the run. They find themselves fighting for survival in a world in which only torment remains and where death is the only escape.

TORMENT has been narrated by the supreme R.C. Bray, the voice behind nearly all of the Infinite Timeline. Once again, he has brought my characters to life, made my jokes funnier, and captured the book’s tone, providing an experience unlike any other. If you’re a reader, I recommend reading as you normally would, but if you really love the story and want to experience it again, give the audiobook a listen and hear the book in a new–and extremely entertaining–way.

We are closing in on the final books for the Infinite Timeline. TORMENT, KHAOS, and SINGULARITY. The end of this year is going to be bananas, and hopefully super cool for all you readers. It’s the culmination of 5? 6? years of work and roughly 1.2 million words peeled from my brain. If you feel inclined, please post reviews for TORMENT and any other books in the Timeline. Amazon and Audible are the two most important outlets for me. If we can make this big, we can hopefully revisit some of the characters in the future, or try this crazy crossover business again.

As for 2023, the current lineup (order may change) is NEMESIS – WAGES OF SIN, HUNGER TRILOGY, and POINT NEMO, a stand alone novel of epic proportions. And if that weren’t enough, I’m working on several comic book projects, AND screenplays. Is that clone of myself ready yet? Sheesh.