To Read or Not To Read…Reviews 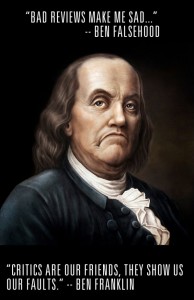 I’ve seen a good number of blog posts recently from fellow authors focusing on the issue of reviews, which can be, and often are, posted by folks with rude dispositions, grudges, agendas, etc. For a new author, even an honest negative review can be soul crushing. To the experienced author, with thicker skin, negative reviews can be a distraction. So the advice being given is generally this: don’t read reviews for your books. Sounds good on the surface. By not exposing yourself to these negative opinions, you are protecting yourself from the pain delivered by Internet trolls with nothing better to do than harass an author. The troll might be angry after reading the first line of a book sample, or might disagree with the pricing, or might be annoyed that Harriet Klausner gave your book 4 stars, or any number of silly reasons for an anonymous rant. And YES, these people should be ignored. They’ve likely taken to the Internet for attention, because the people in their real lives have begun ignoring their sour mood.

BUT, by ignoring ALL reviews you are also missing out on some well thought-out critique. Many readers, including some die-hard fans who know your books better than you do, take time to offer honest opinions, often based on a lifetime of reading. To discount this suggests a few things that I don’t think are good for any writer, new or experienced:

1) That your writing is flawless, or at least so far advanced that Joe-reader can’t find a flaw.
2) That you can’t learn from your fans, or even from your detractors.
3) That readers are, in a way, the enemy, if they don’t like your book.
4) That you are detached from your fans.

Now, before anyone hates on me for implying authors who ignore reviews are fan-hating ego-maniacs, that’s not what I’m saying. The point is that they’re missing out. On connecting with readers. On improving as authors. On increasing sales (in the long run). As someone who has received his fair share of angry, spiteful and even hateful reviews, I understand the temptation to turn away from reading reviews entirely. A bad review, especially a scathing one that is…accurate…can ruin your day. But they can also make future days brighter, if you pay attention to what is being said.

I didn’t begin my creative career as a writer. I went to art school. And every day, we would draw or paint, carve or shape, pouring ourselves into the creation of an image in the same way that an author does a novel. And at the end of every day, we would line them all up and spend a half hour critiquing. And not always gently. And this is universal to art schools. There is something about visual arts culture that recognizes the best way to improve is through frequent honest critique and listening to that critique. This process became part of my creative experience and still is today. I love critique, because whenever someone takes the time to work out the flaws in my art, or writing (and there will always be flaws), I get better.

A few years ago, after the release of THRESHOLD and before I started writing SECONDWORLD, I went to my editor and said, I’ve done three hardcovers for you now. I want to take things to the next level. Tear me apart. Tell me what I can do better. And he did, but not before saying, with a trace of amazement, “You are the first author to ever ask me to do this,” which surprised me at the time, but I’ve since learned that authors really don’t enjoy being told what’s wrong with their writing, or stories, and maybe their blog posts on the subject. 🙂 But the result of this critique, and my applying it to SECONDWORLD, was that sales doubled, the book got a lot of press and my audience grew.

As a writer, I began as a self-publisher. Without any connections in the writing world, I had only two sources of honest critique: my wife and my readers. I released five novels on my own (what I now call the Origins Editions), and the improvement from book to book is pretty obvious. Without honest readers, I’d never have improved, and I’d never have signed a deal with Thomas Dunne Books and 47 North, or become a bestselling self-published author.

But why am I still reading reviews? I have an editor. Hell, I have FOUR editors. And an agent. And lots of author pals. Why still read the reviews?

Because I am not writing for my editors, or my agent, or my author pals. I am writing for YOU, the reader, and for ME. While I pick the content most of the time, I listen to my fans. I’ve written and am writing sequels, because of requests from fans. I’m currently writing I AM COWBOY because of how many people expressed their love of the Czech Cowboy from SECONDWORLD. And I’m still reading reviews because I want my future books to be better than they are now. And that’s only going to happen if 1) honest people speak their mind, and 2) I listen.

Last October, I released RAGNAROK, the fourth Jack Sigler book, co-authored with Kane Gilmour. Kane did an amazing job at matching my style, and we worked closely throughout the process, but I knew it would be different than the previous three. That it would feel different. That there would be flaws introduced simply because it was a collaboration and because I’m not perfect, and neither is Kane (and he would agree). So I was very pleased when a few reviewers spotted these flaws that I couldn’t see and pointed them out in reviews. And after reading them, I agreed with many of them and discussed them with Kane. We’re working hard to apply them to OMEGA, which will be an even better book than RAGNAROK, which I should point out was my first Amazon.com bestseller and has a 4.5 star rating after 110 reviews.

So, if you’re an author, buck the trend that says you don’t need to read reviews. Yes, ignore the nut-jobs. Skim the 5 stars if time is short. But pay attention to those 2 – 4 star reviews. Critiques shouldn’t be feared, ignored or undervalued. They’re good for you. Sure, there are tons of people reviewing books, and not all of them are right, but those nuggets of insight from dedicated fans and readers are invaluable. If you really believe that a reader can’t possibly improve a writer, you’re mistaken. My readers, who are awesome, dedicated, intelligent and invested, are the very BEST people to critique my books.

And if you are one of my readers, know that I am listening, that your opinion matters and that I am doing my best to make sure each and every book is better than the last.