The Day My Dog Almost Died…and I Nearly Joined Him 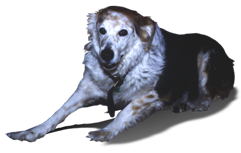 We called him Bud. Or Buddy. But the name on his city registration read: Buddy Boy Paisley Robinson. Not only did he have our family’s last name, but he’d been given a middle name as well: Paisley—my grandmother’s maiden name, my father’s middle name, and my middle name. He was part of the family, name and all.

He was an Australian sheepdog with patches of brown, black and white fur. His stubby tail wagged fast, and his ears felt like silk. I often imagined if he went blind, he’d recognize me by the particular way I pet his ears. I met Buddy when we were both one year old. I spent the first year of my life in a safe warm home. He spent his first year on the city streets. While I ate from a bottle, he picked scraps from trashcans. But my parents rescued him. And nine years later, he needed rescuing again.

In January, Beverly, Massachusetts was a frigid place. Heavy snow fell from gray clouds. The air felt fresh. Sound seemed to travel farther. And the rest of the world didn’t exist. The radio announced that school had been cancelled and the neighborhood gang—Matt, Lauren, Justin, Jenny, Josh and I ventured to the Flynns’ house. The Flynns were an old couple. Their age, and Lenny Flynn’s Alzheimer’s, terrified me. But they had the best backyard for sledding. So we broke out the sleds, made a jump and enjoyed the snow like only kids can.

Twenty minutes into our adventure, a boy from the house that abutted the rear of the Flynns’ poked his head over the tall, cedar fence and said, “Your dog is swimming in our pool.”

This didn’t seem possible. They had a fence. Pools were covered in the winter. Why would Buddy even be in their yard? During the early 1980s, before strict leash laws, dogs roamed in free, happy packs. Buddy sometimes followed us across town to church, running for miles behind our car. But swimming in a pool in the middle of—

The ramifications struck hard and fast. The water in the pool would be freezing. Freezing meant immobility; in water, that meant drowning. My friend was going to die. One of the Robinsons was going to die.

We abandoned our sleds. Any thoughts of this being a trick by the kids at the bottom of the hill (who were known to be cruel) fell away. I led the charge around the house, through the fence’s gate, up onto the porch and to the pool—the wide open pool. No cover. No locked gate. The people at the bottom of the hill were not only mean, they apparently lacked brains of any kind. But telling them off had to wait, because there, in the middle of this large pool, swam Buddy.

Chunks of ice floated in the water, like miniature icebergs. Among the chunks, spun flat shards of shattered ice, presumably the remnants of the ice sheet that covered the pool before Buddy fell in. “I think he was chasing a squirrel,” someone said. I barely heard this, though. I fell to my knees, at the edge of the pool, smashed my hand on the side and shouted my dog’s name.

Buddy’s head barely reached above water, but when he heard me, his dog paddling became more frenzied. He managed to turn himself around. When our eyes met, I saw his desperation. The pain must have been excruciating. But he’d survived for a year on the streets as a puppy. He didn’t give up easily. So he swam hard and made it to the edge.

By this time I’d been joined by my best friend, Justin and my older brother, Matt. The three of us reached out for Buddy. Caught his paws. And pulled. Buddy slipped through our fingers. He fell back.

“No!” I screamed. As Matt and Justin caught hold of Buddy’s paws and kept him above water, I stood and began removing my bright red jacket.

“What are you doing?” someone asked, probably Lauren, the girl next door.

“I’m going to get in and push him out.” I can’t remember if I said it, or just thought it, but that was the plan. I knew it would hurt. I knew I’d probably have to go to the hospital. I even knew it might kill me. But I wouldn’t let Buddy drown. What happened next probably saved my life. My brother got his hand on Buddy’s collar and he and Justin managed to drag the now limp dog out of the water and on to the deck.

Being the fastest, I ran home to sound the alarm, while Matt and Justin and the rest used a sled like a stretcher and carried Buddy the quarter-mile home. Buddy’s tongue turned blue. We dried him with towels, created a hot air whirlwind around him with an army of hair dryers collected from neighbors, and he slowly shivered back to life. Seven neighborhood children piled seatbeltless into the giant green station wagon that day. Buddy lay at our core, wrapped in blankets. We drove twenty minutes through the snowstorm to deliver him to the vet. He returned to us three days later. Alive. And he’d live another nine years, until I was nineteen.

I cried the first time I told my oldest daughter this story. I’m nearly crying now. It’s a bittersweet memory. But I’m thankful for it. The realization that I was willing to risk everything for a loved one was a defining moment in my life. And it’s that kind of willing self-sacrifice I try to instill in the heroes I write, especially in Solomon, the main character of The Last Hunter series. Of course, poor Solomon must endure far more than the near drowning of a beloved pet, but I’d like to think I would be willing to make the same sacrifices if I were in his position. I know this for sure though, I’d still be willing to jump in that pool for Buddy.