As you might know, many of my novels were published by Thomas Dunne Books/St. Martins Press, which is fantastic. BUT, because they are a Big 5 publisher, the pricing on those e-books was about $13, which even I won’t pay for an e-book. MirrorWorld was first released when self-published e-books (including mine) were taking off and putting a serious dent in traditionally published book sales (including mine). As a result, my two novels released from the big publishers (MirrorWorld and Xom-B/Uprising) took a sales hit. It was discouraging at the time. I thought people just didn’t like the books. But the reviews tell another story. People love the books, but they were just overpriced. Well, no more!

The rights for MirrorWorld recently reverted back to me, allowing me to use the cover I preferred and much more reasonable pricing! If you were holding off on MirrorWorld because of the steep price tag, now is your chance! Go grab it! And if you already read it and loved it, spread the news. Because this isn’t a new book, Amazon’s helpful algorithms for new books will ignore MirrorWorld.

If you’ve never heard of MirrorWorld before, just pretend this is a brand spanking new release and go grab it!!

Before the UpsideDown, there was MirrorWorld… 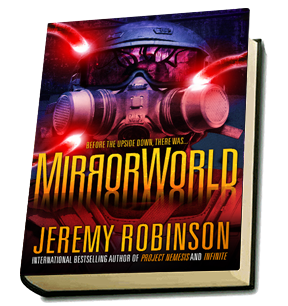 There is a world separated from our own by a thin veil. It is the place where nightmares are born, where fear blossoms into dread, and where monsters of myth and legend reside. Alone in the dark, you feel them, just beyond comprehension as the hairs on your arms spring up. In that moment, you know that you are not alone. And yet, the limitations of human physiology prevent you from interacting with that world in any meaningful way.

But there is one man, who feels no fear and has no memory, capable of not only experiencing that world–but entering it. His name is Crazy, with a capital C, and he will do and say anything as he fights in both worlds, to prevent a war between them.

With MirrorWorld, Jeremy Robinson, whose trademarked pacing and inventive plots have been highly praised by bestselling authors like Jonathan Maberry, Scott Sigler, and James Rollins, treats readers to a wildly imaginative, frenetically-paced thriller exploring the origins of fear.