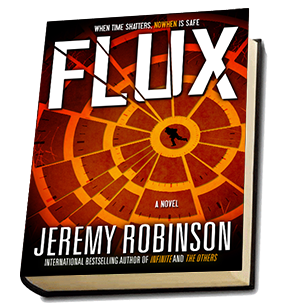 I STARTED my novel writing career with THE DIDYMUS CONTINGENCY, a time travel novel of epic proportions. I’ve been wary of writing another story solely focused on time travel because I wasn’t sure if I could come up with a concept as cool and meaningful, but when I dreamed up FLUX, I knew I had something that fans of Didymus would enjoy reading, and that I would love writing.

Set in Appalachian Kentucky, the characters and environment were fascinating for me to explore and bring to life. It’s a nook of the world we don’t talk–or even think–about much, but research turned up gobs of interesting history involving people, animals and…other things.

So prepare yourself for classic Robinson: frenetic action, crazy concepts, big surprises and yeah, I’m gonna make you cry, too.

For Owen McCoy, a typical day on the job as head of security for Synergy, a research company conducting mysterious experiments, is boring at best. And that’s the way he likes it. Patrolling the Appalachian mountainside, where his now deceased father taught him how to hunt, is relaxing and
connects him to the past.

A wave of light-bending energy–the Flux–rolls down the mountainside, transporting Owen, and everyone in the nearby town of Black Creek, to October 14, 1985, the day before his father died. Two hours later, the second Flux hits, and then a third, and a fourth, each time collecting Black Creek residents from various times. They’re carried through eras filled with wild animals, monsters of myth, ancient beasts…and then beyond.