ALTER – To Survive The Amazon, What Would You…Become? 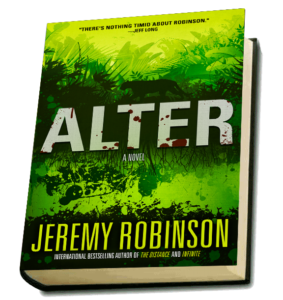 On the surface, ALTER and INFINITE have very little in common. One is a sci-fi epic in space and the other is a survival story taking place in a region of our planet that’s untouched by technology. But dig a little deeper and you’ll find that both follow a main character enduring spectacular challenges that alter his soul—for good or bad. And there’s a reason for this commonality.

When I wrote INFINITE, I was at the peak of my emotional struggles caused by Lyme Disease and Bartonella (the doctors think), and my brain tumor diagnosis (which turned out to be wrong). So a lot of that turmoil was processed through writing the novel. When I wrote ALTER, I was at the height of my neuropathy pain that was so intense I couldn’t be touched or even take a shower. While INFINITE helped me express my emotional pain, ALTER helped my express my physical pain. And I think both novels are better for it…though I would much rather write powerful novels while NOT suffering.

On to the story!

Stranded in the Amazon rainforest, a lost man fights for survival and discovers that the root of evil doesn’t just reside in the world’s darkest corners, but inside the hearts of all mankind.

Dr. Gregory Zekser is on a mission to visit the furthest reaches of the Amazon, providing medical aid to recently contacted tribes. As a general practitioner and food pantry director, his life in Massachusetts can be chaotic, but serving people is what he does best, and he doesn’t mind sacrificing his personal life to help others, at home or half way around the world.

But any hope of returning home to his wife, daughter and comfortable life are eradicated when the small plane carrying him back to civilization plummets into the unknown depths of the jungle.

Swallowed by endless green, with both pilots dead, Greg struggles to stay alive in a world that wants to infect his body, suck him dry and eat him whole. Ravaged by illness and dehydration, and stalked by a ruthless predator, Greg’s life teeters on the edge of oblivion until a scream lets him know that he is not alone.

His first encounter with an uncontacted tribe ends in death—the first of many. Driven to the brink of madness, and then beyond, Greg finds himself caught up in a feud that existed before his arrival, but will only end with his death—or his enemies’.

International bestselling author, Jeremy Robinson, the master of taking creative and original concepts and fusing them with realistic and emotive characters, explores the depths to which a man can descend, and what it takes to climb back out.