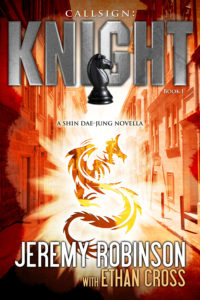 Starting with a bang as Knight’s transport crashes after an EMP, the action goes to the streets and never lets up, as Knight, Anna Beck (whom Chess Team had met in PULSE), and a team of British SAS commandos go up against an unstoppable creature that can regenerate after all injury it sustains. And if that were not enough, after the threat was dealt with, Knight faces a 40-foot tall Kaiju version of the same creature, hybridized with the aforementioned drug addict.

Knight gets pretty battered in this one, but the trauma of this event brings him together romantically with Anna Beck, who later permanently joins Chess Team as callsign: Pawn. A short, quick, excellent read.

Also of note, is a very tiny Easter Egg on the cover of CALLSIGN: KNIGHT, which probably went unnoticed by everyone. On the street sign on the left of the cover, you can just barely make out the words:

Of course, that was in reference to the unrelated novel, SECONDWORLD, which would be released about six months later.

Callsign: Knight (2011) is available in paperback and as an e-book. The story is also available as an audiobook, narrated by Jeffrey Kafer. You can also purchase the e-book as a part of the Callsign: Doubleshot collection, which also includes the Deep Blue novella.