“A rip-roaring adventure through time and space. This book has something for everyone. Pulse-pounding action, great characters, and a ton of laughs.” —Rhett C. Bruno, bestselling author of TITANBORNE 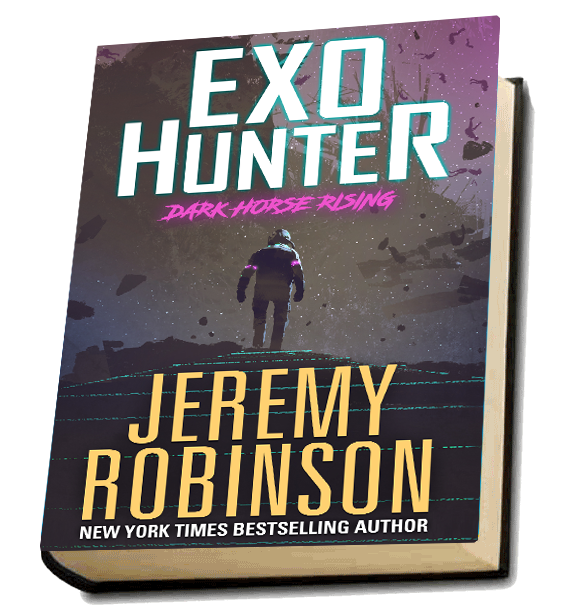 “Science fiction, sociopolitical satire and 1980s nostalgia are the basis for [Exo-Hunter]… a comic look at the absurdity of a society without diversity.” — The Hippo

Callsign: Dark Horse and his Marine Rapid Reaction Force team have been sent to recover a strange artifact near Antarctica’s Soviet-controlled Vostok Station. Confronted by a team of Ruskie Spetsnaz, a battle for control of the strange device, frozen in the ice, breaks out. But before anyone can claim victory, or the prize, an explosion of white light knocks the combatants unconscious and whisks them away to…

One thousand years later. Dark Horse, along with his teammate, Chuy, and one of the Soviets, Drago, finds himself in a future that is both impressive and horrifying. Humanity has left Earth behind and is rapidly expanding throughout the galaxy under the banner of The Union, a white supremacist government who racially ‘purified’ the human race hundreds of years in the past.

Living on the fringe of this twisted Fourth Reich society, Dark Horse—the only Black man in the Union—commandeers a vessel and scours the galaxy for his missing teammates under the guise of an Exo-Hunter, seeking out exo-planets to satiate the Union’s need for colonization. His search takes him beyond the edge of the known universe and into an interplanetary war, guided by a vast intelligence that’s been waiting for Dark Horse’s arrival—for a thousand years.

New York Times and #1 Audible.com bestselling author Jeremy Robinson takes readers on a journey to a dark and twisted future…and makes them laugh. EXO-HUNTER is a light-hearted homage to 1980s science fiction movies that also looks at the dangers of white supremacy and the core values that makes it dangerous, and the butt of the joke. In the audiobook edition, he is joined by #1 Audible bestselling narrator, R.C. Bray, giving readers the most compelling—and most fun—thing to come out of 2020.

“On the surface, ‘Exo-Hunters’ is a fun, almost tongue-in-cheek novel of space adventure. It’s a loving homage to the 80s and to the music and movies that helped shape our culture. At its core, however, ‘Exo-Hunters’ is a not so subtle look at what we’d miss if humanity was ever collectively stupid enough to erase more than half of what we are.” –SFcrowsnest.info