SEARCHING FOR A NEW HOME…

The Galahad, a faster-than-light spacecraft, carries fifty scientists and engineers on a mission to prepare Kepler 452b, Earth’s nearest habitable neighbor at 1400 light years away. With Earth no longer habitable and the Mars colony slowly failing, they are humanity’s best hope.

After ten years in a failed cryogenic bed—body asleep, mind awake—William Chanokh’s torture comes to an end as the fog clears, the hatch opens, and his friend and fellow hacker, Tom, greets him…by stabbing a screwdriver into his heart. This is the first time William dies.

It is not the last.

When he wakes from death, William discovers that all but one crew member—Capria Dixon—is either dead at Tom’s hands, or escaped to the surface of Kepler 452b. This dire situation is made worse when Tom attacks again—and is killed. Driven mad by a rare reaction to extended cryo-sleep, Tom hacked the Galahad’s navigation system and locked the ship on a faster-than-light journey through the universe, destination: nowhere. Ever.

Mysteriously immortal, William is taken on a journey with no end, where he encounters solitary desperation, strange and violent lifeforms, a forbidden love, and the nature of reality itself.

…HE DISCOVERS THE INFINITE.

During some of the first days of my emotional rebound, I hosted the annual RobinsonFest (a weekend of awesomeness with fans, collaborators, and myself). During the worst of it, I debated cancelling the event. I could barely handle the grocery store, how could I hang out with 30 people and be ‘on’ the whole time?

I’ve been saying it for years, but this year I was proved correct as RobinsonFest attendees buoyed and encouraged me. It wasn’t long after the event that I was back to writing and completing Infinite. That’s just a little context as I once again say THANK YOU for supporting me (whether you came to RobinsonFest or not), for reading the books, for posting reviews, and spreading the word. You guys are awesome, and I hope you enjoy Infinite!

PS: RobinsonFest information and registration for 2017 will be available soon. While we are likely expanding again this year, we will still have a cap on attendance, so keep your eyes open and sign up early. 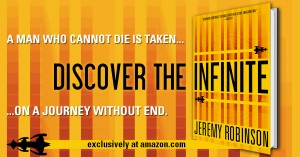