As was reported by Variety.com in this article, the Jack Sigler Thriller/Chess Team novels have been optioned for film by director Jabbar Raisani, whose first film, Alien Outpost has just been released by IFC Midnight via iTunes, Hulu and all other VOD platforms. While Alien Outpost is Jabbar’s first film, he has been the onset visual effects supervisor for films like Predators and Man of Steel, and most notably, won an Emmy for his work on Game of Thrones. As you can see from the Alien Outpost poster, Jabbar’s love of sci-fi military action and powerful visual effects make him the perfect person for bringing Regen Capybara, and the mythological Hydra, to life.

So what does this mean? Basically, we are one big step closer to seeing a Chess Team film adaptation of PULSE. The project still needs to find a home at a studio, but the odds are much better now with Jabbar at the helm. There is no guarantee at this point, but it’s a significant development for the series, and hopefully a hint of things to come.

Yes, along with the announcement of a movie deal comes the newest (7th) installment of the Jack Sigler Thrillers, co-authored once again with Sean Ellis and picking up where the controversial SAVAGE left off. CANNIBAL is full of all the Chess Team goodness you’ve come to expect…and then some. Legends come to life. Horrific monstrosities. And the few people brave enough to stand against them. And the ending…well, you’ll just have to find out how the pot gets stirred (vigorously) in this one.

Still recovering from the tragic loss of a good friend, Jack Sigler, callsign: King, leads the Chess Team–a crew of former Delta operators–back into action. But what should be a routine snatch-and-grab to capture a drug cartel leader, escalates out of control, throwing the team into a challenge unlike anything they’ve ever faced. An enemy from their past, who is close to unmasking their identities, joins forces with the psychotic cartel kingpin, setting a trap that will shake the team to its foundations.

While the team battles enemies old and new, King’s fiancée, CDC disease detective, Sara Fogg, struggles to stop a strange outbreak that transforms the infected into ravenous, inhuman monsters. Once responsible for the disappearance of the Roanoke settlers, the disease now threatens to spread across the planet, ending human civilization in a bloodbath of violence.

Hunted by humans and monsters alike, King and the Chess Team face a desperate choice–sacrifice themselves or let the world bleed. 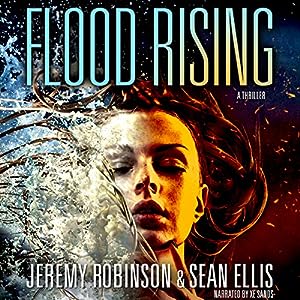 Two new audiobooks have arrived! FLOOD RISING, narrated by the award winning, Xe Sands. This is Xe’s first Robinson narration, and she did a fantastic job. Check it out on Audible and iTunes. 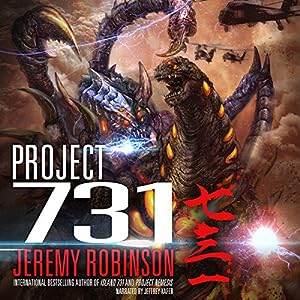 Also new in audio is PROJECT 731, the latest Nemesis novel, narrated by the always awesome Jeffrey Kafer, who has read ALL of the Jack Sigler Thrillers, Nemesis book and scads of other Robinson novels. Also available on Audible and iTunes.