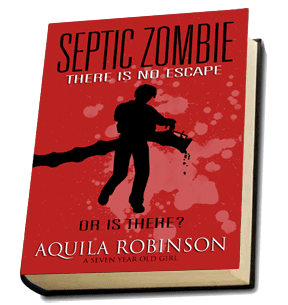 When Aquila Robinson and her friend Naomi find a magical ring at the bottom of a stony creek, strange thing begin to happen. The sound of shuffling feet emerges from the woods, followed closely by a low moaning, "brraaaiiinnsss," that sends the girls running and begins an adventure that could only come from the mind of a seven year old author.

SEPTIC ZOMBIE is the first story written by homeschooled seven year old, Aquila Robinson (the real Aquila). With the help of her father (bestselling author Jeremy Robinson), Aquila has written, art directed, formatted and released this book, which she dictated to her father. Every word is hers, though she did work with an editor (mostly to fix Dad’s typos). She even contacted the authors below and asked them to read the book—those are real endorsements!

THE GOAL: Aquila hopes to sell 3000 copies of Septic Zombie, which will allow her to buy the golden retriever she’s been asking for "all her life."

Aquila Robinson is a seven year old homeschooler with aspirations of being an author like her father, Jeremy Robinson. She also aspires to owning her own restaurant, something she and her friends experienced by turning the house into a restaurant complete with waitresses, chefs, hostesses and real paying customers. SEPTIC ZOMBIE, like the restaurant, is an extension of her creative, child-led homeschooling.