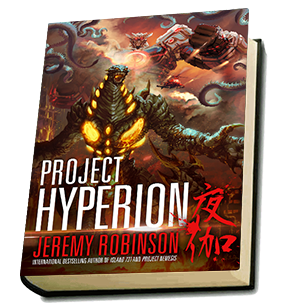 When I first wrote PROJECT NEMESIS three years ago, I had the lofty goal of turning Nemesis into America’s iconic kaiju, rivaling Godzilla. While the Queen of the Monsters hasn’t quite caught up with the King, in just three short years, Nemesis has scored her own video game – Colossal Kaiju Combat – The Fall of Nemesis, and now her own comic book series. With PROJECT HYPERION, Nemesis rivals the number of Godzilla novels released back in the 90’s and with the next Nemesis novel, PROJECT LEGION, Nemesis will become the longest running Kaiju novel series ever, and perhaps the bestselling. And a lot of the credit for Nemesis growing from a single novel into a franchise, I have you readers to thank. Without your support, Nemesis wouldn’t have grown into the beast she is today. And for that, I am grateful, and thrilled to present the next novel in the series!

PROJECT HYPERION picks up a year after PROJECT 731 and continues the story line that started back in my second novel, RAISING THE PAST. There are some iconic and new kaiju in these pages, some old monstrous friends, Nemesis, and of course, Hyperion, that awesome mech gracing the book’s cover. As always, there is creature art by Matt Frank, a fan art section showing off YOUR work, art from a few pros, and a sneak peek at the comic book!

Jon Hudson has become more than just the director of the Department of Homeland Security’s Fusion Center–Paranormal. He is now a husband and a father, surrounded by a team who have become a family. So when a series of strange new threats rise from the depths and fall from the sky, the stakes are higher than ever.

While Maigo, the young woman who was once a part of the kaiju known as Nemesis, goddess of vengeance, and Lilly, a chimera cat-woman, sneak off to investigate Big Diomede, an island with an ancient secret inside Russian territory, two monsters fall from the sky. One heads for Tokyo, the other for the already battered Boston. Tsunamis rise from the depths, leveling cities. The two new kaiju—Giger and Lovecraft—follow close behind, bringing death and destruction with them. And Hudson realizes the horrible truth: the Aeros, an alien race plotting mankind’s destruction, have sent these kaiju in advance.

Drawn by the chaos, and by her connection to people she and her new ‘voice,’ Katsu Endo, are fond of, Nemesis rises to the defense of humanity. But the Queen of the Monsters is not alone. Maigo and Lilly unleash an ancient protector known as Hyperion, and the first battle for the fate of the human race, in all dimensions, begins.

With the first three Nemesis novels, Jeremy Robinson created a new literary subgenre known as the ‘Kaiju Thriller,’ a term now being adopted by other authors. And like all good Kaiju, Nemesis is growing to epic proportions, spawning a video game, The Fall of Nemesis – Colossal Kaiju Combat, and a comic book series titled Project Nemesis, with art by Matt Frank, and published by American Gothic Press, a new imprint of Famous Monsters of Filmland.

With Project Hyperion, Robinson introduces two new kaiju and his first giant robot. You’ll witness the demise of Nemesis Prime, and the kick off of events that will lead to the fifth Nemesis novel.