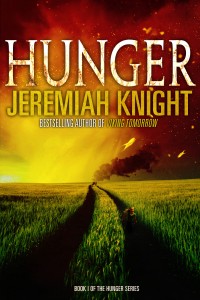 My newest pen name is Jeremiah Knight. I’m sticking with the Chess Team last name theme and expanding my first name into the more serious sounding, Jeremiah. Why more serious? Because Jeremiah Knight specializes in post-apocalyptic fiction and will kick off his writing career with two new post-apocalyptic trilogies. The first of these new books is The Hunger Series, kicking off with HUNGER.  The second series, which will be written with Kane Gilmour, is titled The Berserker Saga, the first of which is VIKING TOMORROW, and I’ll have more details about this after we put together the covers.

“But Jeremy,” you say, “you already write post-apocalyptic fiction!”

This is true, and I will continue to do so under the Robinson name, but the style will vary, and Robinson will be focusing on destroying the world with Kaiju, not to mention all of the series—Jack Sigler, Nemesis, Cerberus Group, Last Hunter, etc.— that will continue into the future. Jeremiah Knight will focus on strange and unique worlds that await us after the end of civilization.

Along with the decision to start another new pen name came the news that starting on next month, Google will start penalizing websites that are not mobile-device ready and responsive, which my previous websites were not. So rather than build a third website for Jeremiah Knight, and attempt to make Jeremy Robinson’s and Jeremy Bishop’s websites mobile ready (an impossible task), I decided to launch a new website under the banner of what unites all three names: monsters. Nearly all of my novels feature monsters in the traditional sense (non-human creatures that eat people), and the few that don’t, have villains that could be argued are still monsters.

So I hope you enjoy the new design, new focus and new novels. Jeremiah Knight is going to be a lot of fun.

JEREMY ROBINSON is the bestselling author of more than fifty novels and novellas, including the robot-zombie thriller, UPRISING, as well as ISLAND 731, SECONDWORLD, and the Jack Sigler thriller series. Robinson is also known as the #1 Amazon.com horror writer, Jeremy Bishop, author of THE SENTINEL, THE RAVEN and the controversial novel, TORMENT. His newest pen name, Jeremiah Knight, will release two novels in 2015. His novels have been translated into thirteen languages. He lives in New Hampshire with his wife, and three children.