Since I was a kid, I have dreamed up Godzilla stories. Anyone who reads my novels knows that the big G had an influence on my storytelling, resulting in novels like PROJECT NEMESIS (and its sequels), and APOCALYPSE MACHINE, not to mention the upcoming UNITY. 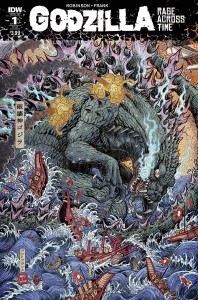 Over the past few years, I’ve been lucky enough to blaze a trail for a new literary sub-genre, the Kaiju Thriller. Creating and building this new sub-genre led to big sales, and the PROJECT NEMESIS comic book, which is closing in on the amazing sixth and final issue.  With Nemesis, I was fortunate to be teamed up with artist Matt Frank, who helped design Nemesis for the novels, and Bob Eggleton, who created six amazing variant covers. And all this is just the beginning for my own kaiju creations.

But that kaiju success has now brought me back to my roots, allowing me to look at my career bucket list, reach out with a black Sharpie and cross off the line that says, “Write Godzilla.” 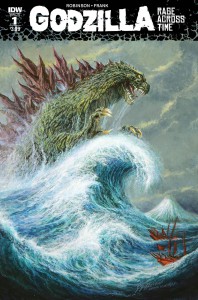 And if that wasn’t awesome enough, I am once again teamed up with Matt Frank and Bob Eggleton. And as you can see from the covers, GODZILLA – RAGE ACROSS TIME is going to be EPIC. In this first issue, we take a look at Godzilla in feudal Japan. Ninjas, Samurai, ancient spirits and Mongol hordes. Not to mention new human characters that you’re going to love.

Here’s the official details. Grab a copy and help make this the best selling single Godzilla issue ever!

Move over dinosaurs… monsters used to rule the planet! Travel to different time periods to examine the origin of myths that fueled nightmares! In this first installment, Godzilla brings his terror to feudal Japan!