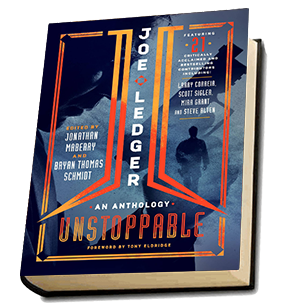 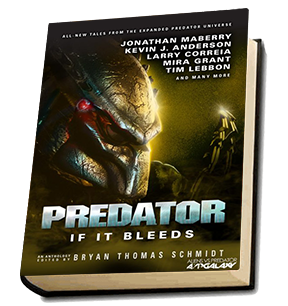 An anthology celebrating the 30th anniversary of the PREDATOR franchise, IF IT BLEEDS includes seventeen brand new, never before seen stories–exclusive to this collection–featuring the Predators throughout space and time. Based entirely on the original films, novels, and comics, PREDATOR: IF IT BLEEDS (a quote from the original movie) reveals the Predators stalking prey in 12th Century Japan, 9th Century Viking Norway, World War I, Vietnam, the Civil War, Hurricane Katrina, and the modern day, as well as across the far reaches of future space. 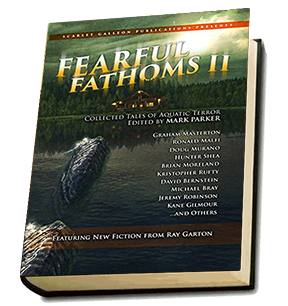 HOW DEEP DOES YOUR FEAR GO? Scarlet Galleon Publications and editor Mark Parker are here to help you find out! Volume II of this new double-anthology features a wickedly dark story (“A Night at the Lake with the Weird Girl”) from Ray Garton, a short, thought-provoking tale (“Out of Her Depth”) by Graham Masterton, and many other eerie offerings set on lakes and other bodies of water. Each story is accompanied by a wonderful, illustration by artist, Luke Spooner. In order of appearance, the stories include: “Dry” by Brady Golden “Undertow” by Ronald Malfi “Deep Waters” by Michael Bray “The Lake Bed” by E.G. Smith “The Terror of Lodgepole Lake” by C.L. Hernandez “Chums” by Doug Murano “Damn Wrinklies” by Hunter Shea “Crude Lake” by Darryl Foster “Lake of Death” by David Bernstein “Rise of Finfolkaheem” by JC Braswell “A Proper Son” by Joshua Rex “The Eater” by Jeremy Robinson “Thick Ice” by Kane Gilmour “Rusalka” by Brian Moreland “The Bull Hole” by Kristopher Rufty “Revenant” by Jeffrey Kosh “Out of Her Depths” by Graham Masterton “Stannard Rock” by Donald Jacob Uitvlugt “Lake Effect” by Mark Parker “A Night at the Lake with the Weird Girl” by Ray Garton

MECH: Age of Steel is a collection of 24 mecha-inspired short stories in the spirit of Pacific Rim, Macross, Transformers, Robotech, Gundam, Evangelion, and more. MECH features a vast array of tales featuring giant, human-piloted, robot war machines wreaking havoc in blasted cities, or on dystopian landscapes, or around space stations and asteroids against a cosmic backdrop, or wherever, you-name-it! MECH is anchored by authors such as Kevin J. Anderson, Ramez Naam, Jason Hough, Jeremy Robinson, and Jody Lynn Nye. This anthology features illustrations for every story and is the perfect companion to its sister title, Kaiju Rising: Age of Monsters. So strap in. Activate your interface array. Let’s rock! 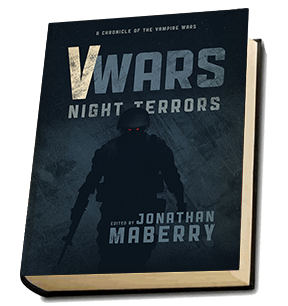 The war is tearing our world apart. Instead of big armies with tanks in the field, the Vampire War is fought in the streets, neighbor against neighbor, family against family. Anyone can turn at any time. The blood hunger can suddenly appear in the middle of a kiss. The person who sleeps next to you every night could wake up in the dead of night… hungry. So hungry… V-Wars: Night Terrors collects all-new stories from the reporters embedded with the beats (humans) and the bloods (vampires). Each tale explores the nature of terror and peels back another layer of our comfort. Each tale bares our throat to the bite. New York Times Bestseller Jonathan Maberry and his team of front-line storytellers bring you all-new tales of horror and heroism, of pain and delight, of deadly despair and soaring courage. The war between beats and bloods is blazing. Pick a side. 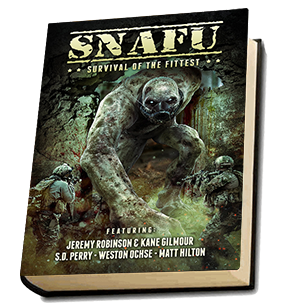 Survive, no matter what. Lost in the shadows, low on ammo; wounded, fighting to make it through, the last remnants of the mission team trying to make sense of where they had gone wrong, and how to make it out alive with next-to-no resources. Where every bullet counts. Featuring nearly 100,000 words of military fiction and sci-fi. – Jeremy Robinson & Kane Gilmour (Callsign: Deep Blue, Ragnarok, and Omega, all part of the phenomenal Jack Sigler/Chess Team series) – S.D. Perry (has written extensively in the universes of Star Trek, Aliens, and Resident Evil, among others) – Weston Ochse (SEAL Team 666 and Grunt Life/Grunt Traitor) – Matt Hilton (author of the high-octane Joe Hunter thriller series) Plus another six established and emerging writers. 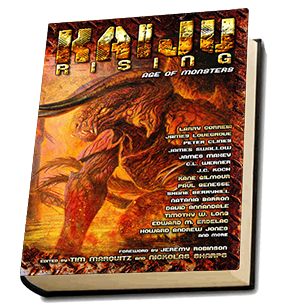 “RATING 9/10: I have to say that assembling all this talent is quite a stroke of genius because each story had something different to offer…everyone involved in the making of this anthology, the authors, the editors, the artists, everybody, did a great job. Each story is bookended with a special illustration (done by either Robert Elrod, Chuck Lukacs, or Matt Frank) that shows off the the kaiju involved in the story…[KAIJU RISING] has really made me want to read and watch more kaiju fiction.” —From a review by Abhinav Jain, Shadowhawk’s Shade KAIJU RISING: Age of Monsters is a collection of 23 stories focused around the theme of strange creatures in the vein of Pacific Rim, Godzilla, Cloverfield, and more. The anthology opens with a foreword by JEREMY ROBINSON, author of Project Nemesis, the highest selling Kaiju novel in the United States since the old Godzilla books—and perhaps even more than those. Then, from New York Times bestsellers to indie darlings KAIJU RISING: Age of Monsters features authors that are perfectly suited for writing larger than life stories, including: Peter Clines, Larry Correia, James Lovegrove, Gini Koch (as J.C. Koch), James Maxey, Jonathan Wood, C.L. Werner, Joshua Reynolds, David Annandale, Jaym Gates, Peter Rawlik, Shane Berryhill, Natania Barron, Paul Genesse & Patrick Tracy, Nathan Black, Mike MacLean, Timothy W. Long, Bonnie Jo Stufflebeam, Kane Gilmour, Peter Stenson, Erin Hoffman, Sean Sherman, Howard Andrew Jones (The Chronicles of Sword and Sand tie-in), Edward M. Erdelac (Dead West tie-in), James Swallow (Colossal Kaiju Combat tie-in)