Each book of the Chesspocalypse is a novella featuring an individual member of Chess Team and co-written by six amazing authors. While the books extend character development and Chess Team’s literary universe, the three Jack Sigler/Chess Team novels are not required reading to enjoy the novellas. If you’ve already read the novels, great. You’ll find more of the same action and mix of mythology, monsters and mayhem you’ve come to love in the series. If you haven’t read the novels, these books make a great introduction to the most fast-paced action adventure novels available! 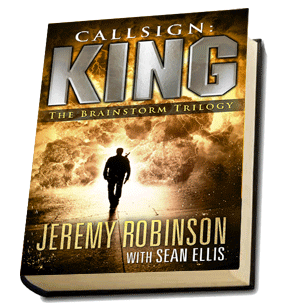 Callsign: King – The Brainstorm Trilogy is a complete collection of three novellas featuring Jack Sigler, aka, King, the lead hero in Jeremy Robinson’s Chess Team. The collection is 144,000 words, far longer than any of the Jack Sigler novels and jam-packed with cool science, high-octane action and strange creatures. The trilogy is $4.00 less than buying each novella separately.

See below for individual title summaries. 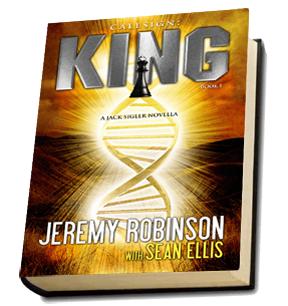 The fabled Elephant Graveyard has been discovered. It contains enough ivory to make Ethiopia a wealthy nation. But the cave contains more than physical riches—it also holds the means to control the world.  Fifteen scientists enter the cave. Only one leaves.

Jack Sigler, Callsign: King (field leader of the covert, black ops Chess Team) receives a cryptic text from Sara Fogg, his girlfriend and CDC “disease detective”. A catastrophic disease has been reported in Ethiopia’s Great Rift Valley, but Fogg suspects something more is going on. Her suspicion is confirmed when King’s arrival in Africa is met by a high speed assassination attempt.

As King fights against two competing, high-tech mercenary forces, each struggling for control of the deadly discovery, Fogg disappears. Working with the surviving member of the science team that made the discovery, King begins a search for Fogg and the source of the potential plague that takes him back to the Great Rift Valley, back to the Elephant Graveyard, and brings him face-to-face with modern man’s origins. 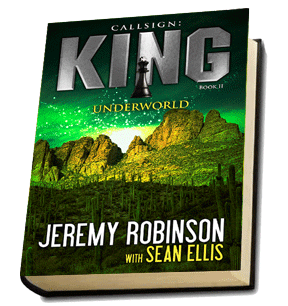 Strange things have always happened in the Superstition Mountains of Arizona… Bizarre lights, reports of cave entrances that appear and then vanish, hundreds of mysterious disappearances…and rumors of monstrous creatures that inhabit a labyrinthine underworld.

When a terrifying accident on an Arizona highway leads to a military exclusion zone and a cover-up of staggering proportions, Jack Sigler—Callsign: King, field leader of the elite and ultra-secret covert Chess Team—joined by his closest friend, archaeologist George Pierce, sets out into the desert, intent on discovering the truth.

Assisted by a beautiful paranormal investigator, dogged by soldiers intent on preserving the quarantine, and pursued by a relentless legendary hitman, King soon finds himself in a race against time to prevent all out war with the creatures that inhabit the underworld. 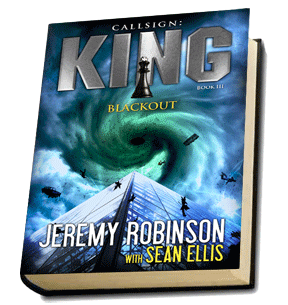 Twice before, Jack Sigler—Callsign: King—has stopped the mysterious ‘Brainstorm’ from destroying all life on earth. Twice before, he’s survived Brainstorm’s assassins. So when the mastermind behind Brainstorm surfaces in Paris, King goes on the offensive.

As the final showdown unfolds in the legendary City of Lights, the villain’s scheme to plunge the world into literal darkness is revealed. But even Brainstorm isn’t ready for the destructive force that has been unleashed…an entity of darkness imprisoned for more than a thousand years, set free now to devour…everything.

The blackout has begun… When the sun rises, the world will end. 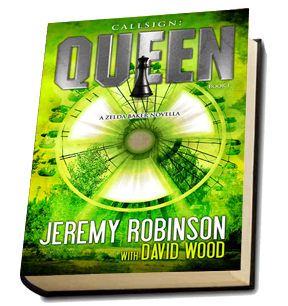 At the beginning of her search for Rook, a missing Chess Team member, Zelda Baker, Callsign: Queen, is redirected to Pripyat, Ukraine, a ghost town on the radioactive outskirts of Chernobyl. Intel indicates that splinter cell of Manifold Genetics—a ruthless corporation dismantled by Chess Team—may be operating in the area. Tasked with confirming the existence of a Manifold facility, Queen begins a recon sweep of the abandoned town in search of clues, but soon finds herself fighting for her life. Something sinister lurks beneath the decaying, surreal remnants of Pripyat’s never-used amusement park, and it rises up to greet Queen.

In Pripyat, the streets are empty, the derelict buildings crumble, but the bodies…are fresh. 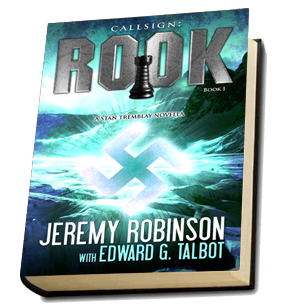 After a failed mission claims the lives of his five man support team, Stan Tremblay, Callsign: Rook, flees Siberia and finds himself on the secluded coast of Norway, north of the Arctic Circle. Exhausted, cut off from the outside world, and emotionally beaten from his defeat in Russia, Rook just wants to find a place to rest. The small coastal town of Fenris Kystby seems like the perfect place.

Within hours of arriving, he discovers that the town is not as tranquil as it appears. The townspeople are mistrustful of outsiders, a pack of mysterious wolves stalk the local tundra, and two villagers have been killed by a creature that defies explanation. To make things worse, there are rumors of something sinister, something the townspeople refuse to discuss.

Despite the hostility of the locals, Rook commits to stopping the creature murdering townspeople. As the body count rises, he quickly learns that the greatest threat might walk on two legs. And when he uncovers the town’s hidden past, Rook knows only one thing for certain: something is rotten in Norway. 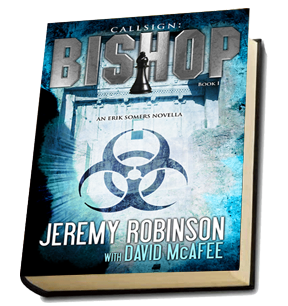 An Iranian terrorist cell has gotten their hands on weaponized Ergot-B—a compound that causes violent hysteria, madness and death within 24 hours—and plan to unleash the weapon on major cities around the world. Successful deployment would begin a bloodbath as those exposed would kill everyone they encountered before succumbing to the compound’s lethal effects.

Erik Somers—Callsign: Bishop, is called in to investigate, but his first discovery shocks him to the core. Dawoud Abbasi, the terrorist leader planning to unleash Ergot-B, is his biological father.

Bishop, along with an undercover Delta operator known as Callsign: Joker, race across the unforgiving Iranian desert in search of the Ergot-B. Seeking answers, both professional and personal, Bishop must fight against a private army, Iranian Special Forces and men driven mad by Ergot-B. With the life of his biological mother in the balance, and countless more people in cities around the world, Bishop must call on all his strength to not only survive, but also stop the man revealed as his father—even if he has to kill him. 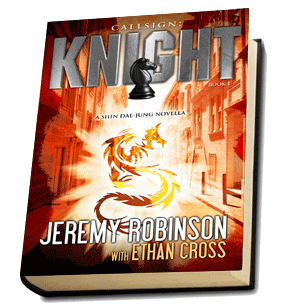 When a team of Delta operators goes missing in Shenhuang, one of China’s newly constructed ghost cities, Shin Dae-jung—Callsign: Knight is called in to assist. But the Osprey transporting him to the scene falls prey to an EMP attack and is forced to crash land atop a parking garage. With a wounded pilot in tow, Knight explores the empty city for signs of life and finds two terrified children who warn him that something monstrous is stalking the city. When the pilot disappears, leaving a pool of blood and spent bullet casings behind, Knight doesn’t doubt their story.

As bullets fly and bodies drop, Knight must protect the children, uncover the fate of the missing Delta team and defend against an unstoppable killer whose ability to regenerate and whose horrible appearance reminds him of something he’s faced before—the mythological Hydra. But he’s not alone in the surreal abandoned city. A team of SAS soldiers, along with Anna Beck, a former member of Manifold Genetics’ private security force, join the fray. Together, they fight against a nightmare that follows its objective to the end: kill them all. 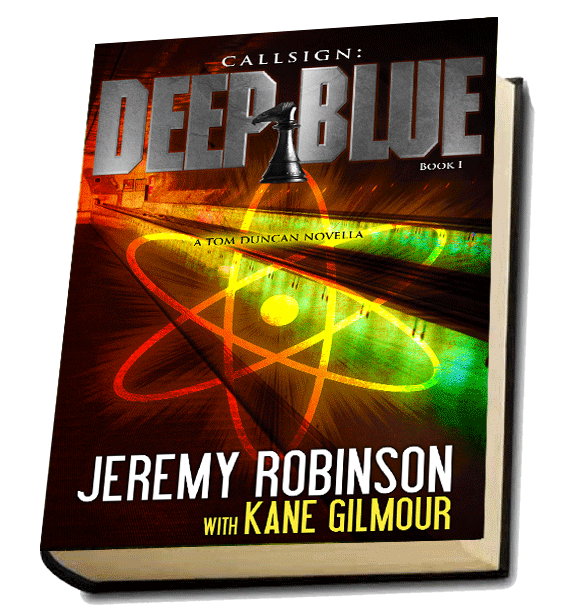 Tom Duncan—Callsign: Deep Blue, former Army ranger, former president of the United States and handler of the black ops force known as Chess Team, is visiting the team’s new secret headquarters. The underground facility, known as Alpha, once belonged to Manifold Genetics, a corrupt corporation shut down by Chess Team. But despite being abandoned for years, Alpha still hides secrets

Security doors slam shut and lock, sealing Duncan and his assistants inside. As Matt Carrack, the leader of Duncan’s security team, attempts to gain access, Duncan discovers they are not alone inside the abandoned facility. High tech intruders have infiltrated the base, their goal unknown. But a far greater threat rises from the subterranean depths beneath Alpha—failed regenerative experiments from the days of Manifold, and they’re fast, hostile and hungry.

While the security team are beset by ingenious death traps, determined mercenaries and vicious creatures that defy their imaginations, Duncan and his personal bodyguard must battle the growing tide of creatures, stave off the incursion of enemy forces and prevent the violent intruders from releasing the horror currently contained inside Alpha, to an unsuspecting outside world. And as the battle rages, a bomb quietly counts down in the shadows.