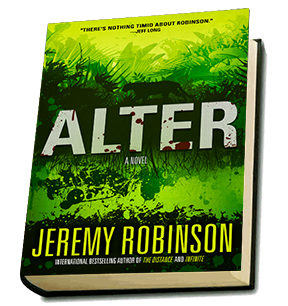 ALTER is my most mind-bending and heartfelt story since INFINITE. And like the main character of that ill-fated space adventure, Greg Zekser, a doctor from Massachusetts, finds himself alone in very unfamiliar and unfriendly territory. Unlike INFINITE, ALTER takes place in the depths of the Amazon jungle, on Earth, and is very much grounded in reality…and all its brutality. The other similarity to INFINITE is that I wrote this book while dealing with the worst effects of severe head-to-toe neuropathy, caused by a disease that might be Bartonella (stupid ticks!), and which I’m still struggling with today (it’s not as severe now). While Will suffered along with my mental anguish of the year before, Greg got a full dose of my physical discomfort, resulting in a more poignant story, as Greg and I discovered what physical suffering felt like for the first time, together.

While I’m not thrilled to have this disease, I AM thankful to be fortunate enough to channel my discomfort into something positive, the first two chapters of which can be found below.

*The audio edition will likely be out in February and is being performed by Luke Daniels.

A tree branch is the first thing I see upon waking. Normally, such a mundane thing wouldn’t garner a second glance, but as my eyes adjust to the shifting light around me, I focus on the twisting limb slicing through the air in front of me. The bark is smooth, as far as bark goes, like the hide of some hairless mammal. A hippo, perhaps. A few green leaves add color to its heathered gray surface.

As the branch grows larger, I stop seeing the bark and the leaves. All that remains is the limb’s kinetic potential.

A sound like screeching brakes drives home the limb’s murderous intent. The Cessna’s two pilots’ high-pitched screams reveal the state of their unpreparedness for what comes next: eternal supernatural life or nothingness. As my own scream builds, I realize I have yet to fully contemplate the issue myself. I’ve always been so focused on the plight of the here-and-now that I never really gave much thought to what comes next. Probably why I never finished that novel I started.