The Apocalypse is Coming…in TWO WEEKS. But You Can Read the First Two Chapters Now!

Are you ready for the apocalypse? 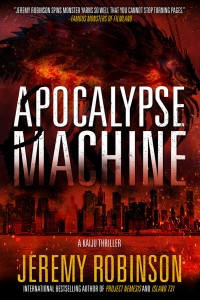 This is one of my most epic novels to date, and that’s saying a lot. I’ve destroyed civilization before. I’ve doomed the planet. But this time, I’m taking the Kaiju Thriller genre and blowing up the scale to tell a kind of monster story that has never been told before. Where Nemesis takes us on a classic giant monster journey, Apocalypse Machine treads new ground. How? There are two answers to that question.

First, did you think Godzilla (2014) would have been even better if it remained character driven by Bryan Cranston? Of course you did. Everyone did! That’s why I made sure that it was the human characters driving the story forward. The plot might revolve around a giant monster, but it’s the complicated and very real characters who will keep you turning pages. Second, Apocalypse Machine will be the first kaiju novel to be released as a hardcover novel (in the U.S. anyway–not sure about overseas). When it came time to package the book, anything less than a hardcover didn’t do its epic scale justice (though it will also be available in e-book). Your next question is no doubt, “Aren’t you a cocky bastid?” which is then hopefully followed by, “When is it coming out?”

In answer to the first question, “A little.” But I only talk like this when I’m confident I’ve written something special. And to the second question, I say:

It will be available in hardcover everywhere books are sold (your best bet is to order online when it’s released–no pre-order) and in e-book, exclusively on Amazon for the first few months. Sorry to non-Amazon users.

Now then, on with the sample chapters!

T.S. Elliot got it wrong. The end of the world doesn’t begin with a bang, or a whimper. It begins with a toe prick.

“God damn, son of bitch!” Kiljan Árnason falls to his side, the blow cushioned by layers of clothing and a thick down jacket. He clutches his boot, hisses through his teeth and swears again, “Mother fuck! What was that?”

The four people with him—three scientists and myself—have a good laugh at his expense, not because we’re sadistic and enjoy seeing people in pain, but because our long-bearded Icelandic guide has done us the courtesy of cursing in English. His thick accent somehow transforms his broad, 6’4” tall, hair-covered frame into something adorable, rather than fearsome. His Viking ancestors might have split us in half with an ax for laughing at him, but as he rolls on his back, still clutching the boot, Kiljan chuckles along with us.

END_OF_DOCUMENT_TOKEN_TO_BE_REPLACED 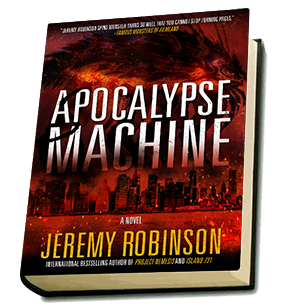