Refuge, New Hampshire, is a small town. The kind found on postcards. Their biggest concern is the rowdy summertime revelers making their way up from Massachusetts and New York. And with most of the town’s residents in neighboring Ashland, for the Fourth of July fireworks show, Refuge is quieter than usual. That is, until the Baptist church’s bell starts ringing—on its own.

The bell chimes faster and faster, reaching a frenetic pace, as though rung by the Devil himself. But the bell is just the beginning. The air shimmers. The night-time sky fills with a burning red aurora. The moon, previously a crescent, is now full. And just hours after dusk, the sun returns to the sky, revealing an endless desert where there was once a mountainous pine forest.

Led by ex-Army Ranger turned surrealist painter, Griffin Butler, Sheriff Rebecca Rule and her deputy, Helena Frost, the residents of Refuge must whether an ever changing onslaught of otherworldly dangers while trying to uncover how and why the landscape beyond town shifts every time the church bell tolls.

As a sequence of horrific events threaten to destroy the town, the residents must band together, search for answers and find a way to defend their homes, or Refuge will be lost. 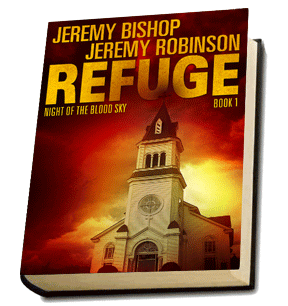 Rebecca Rule is the sheriff of Refuge, New Hampshire. Her biggest concern is the rowdy summertime revelers making their way up from Massachusetts and New York. With most of the town’s resident’s in neighboring Ashland, for the 4th of July fireworks show, Refuge is quiet. That is, until the Baptist church bell starts ringing—on its own.

The bell chimes faster and faster, reaching a frenetic pace, as though rung by the Devil himself. But the bell is just the beginning. The air shimmers. The night-time sky fills with a burning red aurora. The moon, previously a crescent, is now full. And just hours after dusk, the sun returns to the sky, revealing an endless desert where there was once a mountainous pine forest.

Rule must guide the confused and frightened residents of Refuge through the first terrifying hours of acclimating to this horrifying new environment, while protecting them from inhuman dangers both inside and outside of the town’s newly clean-cut borders.

In a world gone haywire, only one thing is certain, no one in Refuge will ever forget the night of the blood sky. 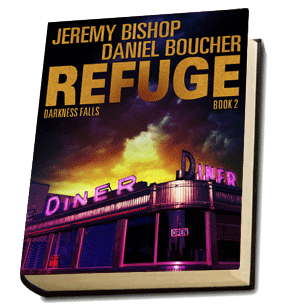 Sam Lake awakens from an alcohol-induced stupor to find his town, Refuge, New Hampshire, is no longer on an Earth he recognizes. While he slept, the town shifted between universes, leaving behind loved ones, severing all contact with the world they knew and resulting in several deaths—including that of Sheriff Rebecca Rule. The new Sheriff, Helena Frost, and the recently deputized ex-Army Ranger, Griffin Butler, work to coordinate a response and figure out what’s happening to their small town, but they need help.

Struggling to come to terms with the new, dark world raining ash on the town, Sam and his friends, Jimmy and Dana, volunteer to visit the local radio station and attempt to contact…anyone. With his son Wyatt along for the ride, Sam leads the group toward the radio station, and the edge of town. But the increasing gloom hides the denizens of the new world, who are slowly invading, as the darkness encroaches on the town, claiming one person at a time.

The town of Refuge responds to the otherworldly with bravery and Yankee gumption, but can they survive as darkness falls? 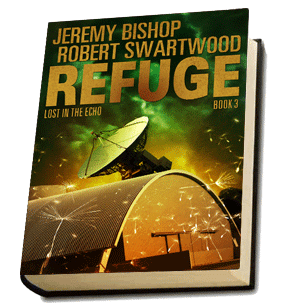 The town of Refuge has finally come to a safe place. Surrounded by a serene freshwater ocean, it seems the town has been given a reprieve from the terror it has experienced since the shifts began. The wounded are treated. Fractured psyches are mended. And the search for answers begins.

But then, the town shifts again, and it is deposited in a world of massive scale, where trees tower like skyscrapers and the creatures flying overhead are the size of 747s. After finding a three-hundred-foot-long severed tail, Sheriff Helena Frost and the newly deputized Griffin Butler lead a small team to the National Guard Depot, in search of weapons. The need for self-defense has never been greater, but the weapons are protected by two hostile forces: one familiar and the other beyond comprehension.

Despite the scale of this new world, and the vastness of their new enemies, nothing is more frightening than Winslow’s newest theory—Refuge is lost in the echo. 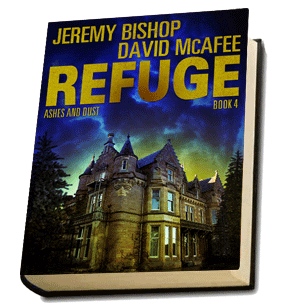 With the latest shift, the inhabitants of Refuge, New Hampshire find themselves in the charred, desolate landscape of a burned out, husk of a world. Using weapons recovered from the National Guard depot, Sheriff Helena Frost begins to organize the survivors into armed units ready to defend the town.

But the mystery woman known as Sally Field, cracks under the pressure of constant and strange danger. Out of her mind, she makes a run for the town’s border and into the new, dead landscape surrounding them. While Griffin Butler goes in search of Renford Ellison, the elusive multi-millionaire scientist, Frost, along with Pastor Kenneth Dodge, leads a team to recover the woman and bring her back to safety.

Beyond the town border, Frost makes a startling discovery—this new world was not always a dry, dusty ruin. Something burned it, and Frost and her group are about to find out what.

Can Frost get her people safely back to town, or will the denizens of this blighted world forever add their bodies to the ashes and dust? 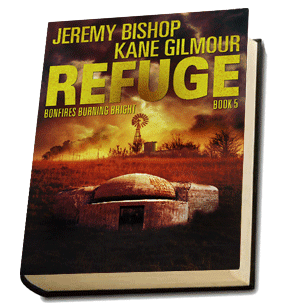 The surviving inhabitants of Refuge have been shifted between worlds, never knowing what would come next. When the bell rings out once more, and the town is deposited in a new dimension, they find themselves surrounded by the worst of all possible landscapes: Hell. And a very familiar one, at that.

As Griffin and Frost work to safeguard the town’s survivors from untold dangers yet to come, and solve the enigma of Renford Ellison’s plan, the town is thrust into a world straight out of Griffin’s nightmares—and his twisted, surreal paintings.

New alliances are formed. Answers emerge. But when Avalon is taken beyond the town’s border, Griffin must venture out into the hellish landscape, navigating a labyrinth of flesh and skulls. To save the life of his daughter, he will have to face down an evil he thought existed only in his imagination. And the clock is ticking, because the church bell is ringing…

In their darkest hour, with danger all around, will the inhabitants of Refuge find their way past the bonfires burning bright, or will they be lost forever?