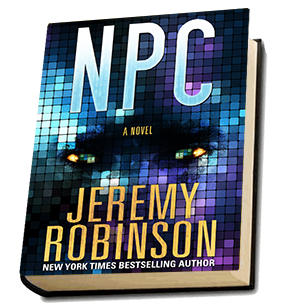 Are the people you call friends and neighbors living beings with inalienable rights or are they NPCs—Non-Player Characters—whose soulless path through life is predetermined?

Samael Crane, a brilliant scientist, believes NPCs are all around us. And he can prove it.

When a body is discovered in the bay off Essex, Massachusetts, small town pastor and former Marine plagued by doubts, Ezekiel Ford finds himself called in to identify the deceased. His history is unknown. His full name is a mystery. No one knows where he came from. In fact, Ezekiel seems to be the only person in town who ever really noticed him, living on the fringe of reality, and sometimes in the homeless shelter supported by his church.

Ezekiel’s involvement in the case doesn’t go unnoticed by Samael, who has set out to prove—through deadly means—that NPCs exist, that reality is simulated, and that ‘God’ is a coder with a grudge. The two men’s missions become inextricably entwined, leading them down a path through the gray area between good and evil, science and religion, and reality and simulation, barreling toward a truth that will change the world and humankind’s place in it forever.