Jack Sigler, Callsign: King, has been a lot of things in his life. A soldier, a father, a hero. But now he’s taking up a new title: guardian.

After a life fighting billionaire madmen, terrorists and unnatural threats, he’s stuck thousands of years in the past, using his knowledge of history and modern warfare to right wrongs and stand up for those in need.

When he meets a twelve year old boy—the prince of the Babylonian Empire—who is to be sacrificed to the ancient goddess, Tiamat, by a twisted High Priest, King steps in, sword swinging. But what starts as a simple snatch and grab, quickly turns into a pitched battle against a legion of men and hideous creatures. As Tiamat rises from her ancient resting place, the fate of the world—and King’s future—is at stake.

Trapped millennia in the past and gifted with regenerative abilities, King must live out the centuries until he returns to his own time and his family. The Jack Sigler Continuum series tells the events that occurred in King’s life as a result of the full-length novel, Omega, but no prior reading is required to enjoy the Continuum series. Each story will be a standalone adventure, and a great jumping-on point. For more of King’s adventures, check out the entire Jack Sigler/Chess Team series.

SOMETIMES, THE COST OF IMMORTALITY IS TOO HIGH…

The year is 1775, and the first rumblings of the American Revolution are only just being felt. But the War for Independence may be over before it even begins. When General George Washington learns of a daring expedition by British troops to discover a place of ultimate power—and the key to immortality itself—he knows that to salvage the war effort, his forces must get there first.

And to find the legend, Washington must employ a legend. Rumors of an ageless pirate who has haunted the high seas for more than a century abound. General Washington commissions an expedition to find and hire the immortal pirate, Lanme Wa—the Sea King—who has been stretched to the point of breaking, and who wants nothing more than to be left alone.

Their mission will not be easy. In a Caribbean world filled with voodoo, giant pythons, mischievous spirits and an army of mindless creatures who could live for millennia, the privateers of the Continental Navy might have bitten off more than they can chew.

Jack Sigler, an immortal Special Ops soldier stuck in the past, forced to live through thousands of years of history to return to his family in the present, is back in this second Continuum thriller from Jeremy Robinson and J. Kent Holloway, who once again boldly re-imagine history. 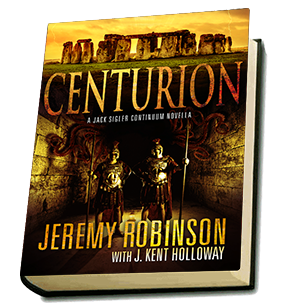 A.D. 102. Two men—centurions in the Roman Legion—are locked in an eternal battle with destiny. One is a fugitive, driven mad by the deeds of his past. Haunted by a demonic force that has tortured him for more than half-a century, he fights to retain his sanity long enough to separate himself from civilization.

The other is Jack Sigler, Callsign: King, a former Delta operator torn from the present and hurled into the pages of history. King must endure the long journey through the ages in order to be reunited with his loved ones in the world he knows.

When the plagued Centurion cuts a swath of destruction from Jerusalem to Britannia, entire villages are destroyed, the bodies of the dead torn apart, becoming part of something larger, something ancient and evil. When King crosses path with the Centurion, and sees the decimation caused by his affliction, he stands in the path of history once more, willing to fight, and sacrifice to save the innocent.