One Man’s Trash Is Another Man’s Sovereign Nation

A Review of Great Pacific: Trashed
By Christopher Ouellette

Lots of people speculate on what would happen to Bruce Wayne if Thomas and Martha Wayne had not been gunned down that night. What if they had lived but their generous souls were dead? What if they were just the greedy 1%, moved out of Gotham and ruthlessly pursued corporate control over the world market? How would their son react? When the evils he saw around him were greedy fat cats driving the world into the ground by buying up people and governments, he might not have invested in a costume. Instead, he might have taken up residence on a floating garbage island and declared it a sovereign state. He might have become Chas Worthington, protagonist of the Great Pacific comic book series by Joe Harris and Martin Morazzo.

Clad in off white athletic gear, Chas has set out to survey all he rules. He is a trained fighter who has learned skills by traveling the world and helping those in need. He has a best friend from childhood who acts as his personal assistant and butler. He has the vast resources of his family’s money to bank roll any amazing scheme and a few wild gadgets as well. His party boy façade keeps people from considering him a threat. Where others come up with fancy secret identities, Chas has faked his own death before moving to the floating island of garbage that he has named “New Texas.”

Chas has everything he needs to become a superhero, even if his outfit looks like Robin hitting the gym. So it’s time to introduce the rogues gallery. A mutant octopus is trying to kill him from under the weaker parts of his island. There is a group of tribal warriors led by a little girl. The Russian warhead discarded among the trash has brought a punk group of French pirates. And the US military is after him, too.

This is a hard book to review because I usually start with a summary of the story’s setup, but Great Pacific: Trashed is a setup. I spent the entire book meeting characters and learning bits of intrigue and wondering how it would all fit in. I don’t think there is enough for me to care about the characters yet, but the action scenes still come off tense with great writing and dynamic visuals. The intrigue seems plausible and exciting. The art is well done but never stylized. The dialogue is well written, though at times the cussing stops feeling natural and just feels like shorthand for ‘edgy dialog.’
I keep looking back at this review, and I feel like I’m just making a list, and then I flip through the book and feel that I had just read a list. I guess the bottom line is, this book has fun moments and is building to the start of a story. It has a lot of players and they are starting to come into focus. I did enjoy it as I read, but I kept waiting. Even the action scenes felt more like a preview of coming events instead of full on fights. All in all, if the rest of the series is really good, then this book is well worth it. In my head, I see that the components are all here: Good art, good writing, interesting characters and a compelling scenario. It is logical to assume that they will get going in the next book and put together a really fun, well paced, elegant story. Still, nothing here made me feel like
grabbing the next book.

Great Pacific: Big Game Hunters and Great Pacific: Nation Building are sitting in the pile of books next to me. So I will leave it up to you. Should I grab the books and find out what all of this was leading up to? 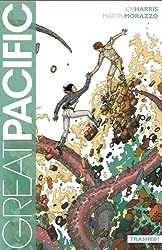